Situated in the heart of Wigtownshire, Glenluce offers a range of activities in and around the village for both visitors to the area and local residents. These range from walking and cycling, angling and golf through to paintballing and clay pigeon shooting. The unspoilt beach at nearby Stairhaven also offers stunning views across Luce Bay, especially at sunset!

Starting in Glenluce itself and heading along the New Luce road and left at the old railway viaduct for St. Helena Island, there is a path which follows the bank of the picturesque Water of Luce where goosanders and herons can often be seen fishing. The grassland here is an important site for breeding birds such as lapwing. This attractive riverside walk eventually leads to the wide, pebbly shores of Luce Bay. This complete walk to Luce Bay and back will take roughly 1.5 hours and is about 2.5 miles in total.

Please note: Do check the tide times as this path can occasionally become flooded after heavy rain and at high tide.

There are many other walking opportunities nearby including spectacular coastal walks and hillwalking in the Galloway Hills.

The nearby 18-hole Wigtownshire County Golf Club is a true links course situated on the shores of Luce Bay and one of the most popular holiday golf courses in South West Scotland. Golfing here is possible all year round thanks to the temperate climate.

Galloway boasts some of the best fishing rivers anywhere in Britain. The Water of Luce, which runs adjacent to Glenluce, produces a fair number of salmon and some sea trout. Permits are available from the Stranraer and District Angling Association and from local hotels.

The Glenluce Gun Room is not only a shop stocking guns and cartridges, but also a shooting ground offering clay pigeon shooting for individuals and corporate parties, for able-bodied and disabled visitors. Visit their website by clicking here.

Glenluce Bowling Club is situated at School Road, Glenluce. For information about matches and membership, contact the club on 01581 300599.

For aviation enthusiasts, Glenluce also has a successful model aircraft club which holds regular events. The Glenluce and Galloway Flyers was founded in 2005 and members fly their aircraft on farmland near Glenluce itself on Saturdays after lunch and on Wednesday evenings, weather permitting, of course! 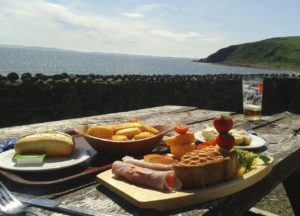